I didn’t forget about this challenge. I just forgot to post the pictures.

Today’s room is the bedroom. 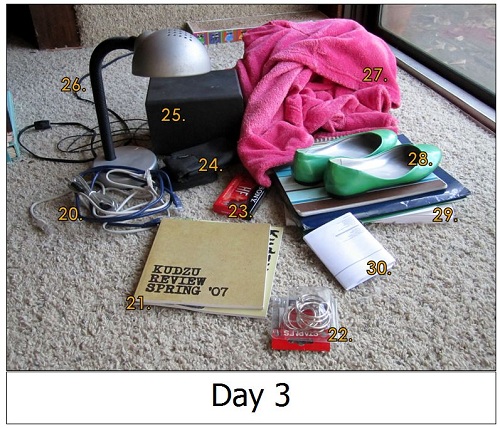 20. Computer cords – don’t use
21. University poetry books – don’t need
22. Paper ring fasteners – don’t use
23. Blank cassette tape for making mixed tapes (yeah!) – don’t use
24. Found the cases to the cameras I recycled in day two – don’t need
25.  A big speaker – don’t use
26. A lamp with a funny shaped light bulb. The bulb died years ago and I still haven’t replaced it, but kept it around for such a long time. This was a much needed purge. – don’t use
27. Bathrobe – don’t use
28. Cute, but uncomfortable shoes – don’t use
29. Old notebooks from my university days – don’t need
30. An instruction manual for an electronic device I no longer have – don’t need

Here’s the second round of my fifty-thing cleanup.  I was excited to de-clutter some of my living room. 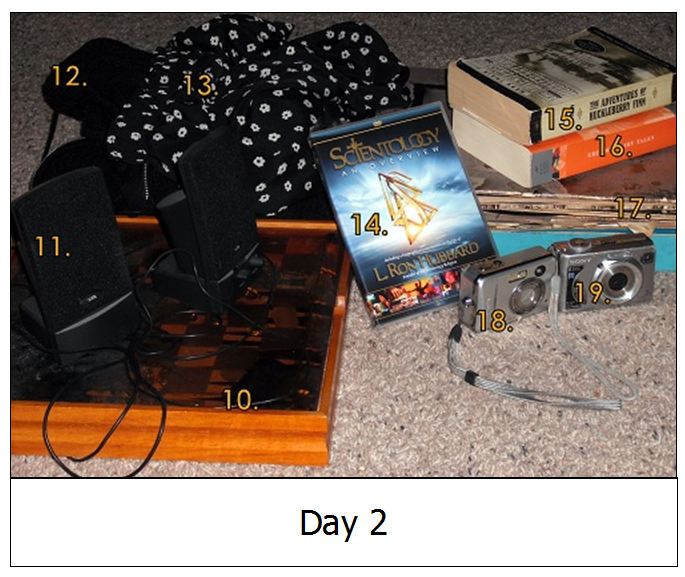 10. Glass chess set: Don’t use – I’ve had it for years and never used it.
11. Computer Speakers: Don’t use.
12. Black Sweater: Don’t need. It’s ugly [got it off of freecycle].
13. Floral Print Pants: Don’t love. Got them from the Goodwill hoping to make something out of them, but I hate the pattern.
14. Scientology Video: Don’t use/need. Don’t ask.
15. The Adventures of Huckleberry Finn: Don’t need. It’s a high school book I’ll never read again.
16. Grimm’s Fairy Tales: Don’t need. Bad edition.
17. My record collection: Don’t use. I don’t even have a record player. I’ll give the Led Zeppelin Vinyls to the bf and thrift the rest.
18. My digital camera: Don’t use. It broke.
19. My sister’s digital camera: Don’t use. This one’s also broke and mysteriously slipped into my luggage one day.

I’m getting rid of my electronics via Gazelle.com.

Day three will be the bedroom! I’m happy to be getting rid of these things. In a day or two, I probably won’t even notice them missing.

How did I get so much stuff?

The other day someone told me that I have a lot of stuff. I found this really insulting. I never felt like more of a consumer. Granted, the majority of the stuff I own is secondhand. In America, we’re encouraged to buy and consume. I don’t think I’ve ever been encouraged to throw away, let alone, throw away responsibly and try to find the proper home for unwanted goods. So how did I get to be the person with so much stuff? Well, I haven’t moved in a few years. People tend to throw things out when they move, and I just haven’t been faced with that challenge. I also hate wasting things. I’m the person that eats food past the expiration date and tries to find a use for everything. I’m also a bargain shopper. So what if it doesn’t look that great? It’s $6. Or, Well, I don’t know what I’m going to eat this with, but I’ll think of something. My freezer is filled with buy one get ones, although I’ve made great progress in this area.

How I’m cutting down:

– One in. One out. While this can apply primarily to things like makeup, I realize that this could also apply to my coffee and tea bags. I’m not quite brand loyal, so if something seems good, I’ll buy it. Now I have 3 bags of coffee (Down 1 from Day 1), and at least 7 different types of teas. No more. One in. One out.

–Thrift only when you have something in mind. Normally, I thrift as a cheaper alternative to shopping therapy. But I’m going to have to stay away from the thrift stores unless I have already planned out my purchase.

–Do dishes after every meal. What does this have to do with living with less? A lot. The reason why I have three cutting boards or a ton of coffee cups is because I’m afraid one might already be dirty or left in the sink. Don’t judge, you’ve done it too.

–Know where you’ll put it before you bring it home. I can’t tell you how many times I’ve brought something home and it has stayed in a bag for about a week. Then it slowly moves to the floor, then to the kitchen table, then eventually finds a home somewhere. If you’re having this hard of a time finding a place for it, chances are, you shouldn’t have bought it to begin with. It sounds like an impulse buy to me.

–Try to think of the last time you’ve used it. Everything in the picture above – I haven’t used in over a year. If you’re making a mental argument as to whether you should throw something out or not, try to remember the last time you had use for it. Part of living a purposeful life is having purpose for the things that surround you.

So what are your tips to keeping your clutter at a minimum?

My life is too cluttered. So, I’ve been inspired by Jess‘ post for throwing out 50 things. Over the next few days I’ll go through every room in my house and find 50 things to part with. They’re just things right? Also, I vow to throw them out responsibly, which means, recycling electronics, giving to second-hand stores, etc.

I started in my kitchen, which is huge, but still has no space. 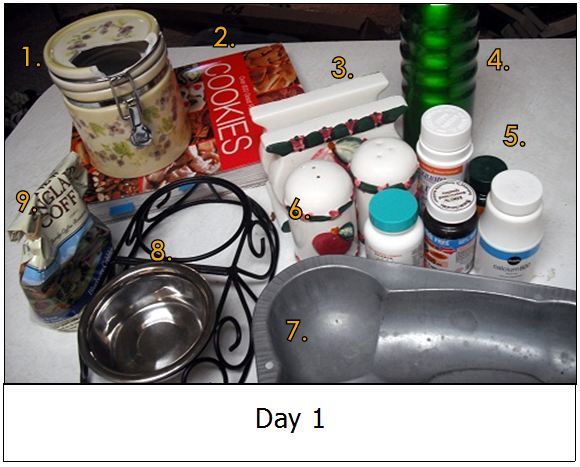 1. Broken Container: Don’t need: used to hold Splenda packets, but I’ve given it up.
2. Book of Cookie Recipes: Don’t use: has terrible recipes, I sort of feel bad for donating it.
3. Napkin Holder: Don’t use: I don’t use napkins.
4. Aluminum Water Bottle: Don’t use.
5. Expired Vitamins: Don’t use/need.
6. Salt & Pepper Shakers: Don’t use. One’s missing a stopper at the bottom.
7. Penis-shaped cake pan: Don’t use. An embarrassing gag-gift from college. I’m convinced I’ll never use this again. Also, I’m not sure if I should donate this or chuck it. Thoughts?
8. Cat dish: Don’t use. Missing a bowl. Very obnoxious dish.
9. Blueberry flavored coffee: Don’t use. Absolutely disgusting.

Tune in tomorrow for the living room!