The CSA bounty has been outstanding lately. We renewed our share for the summer crops.  This was our last week’s CSA.

This week’s grab was red and green: tomatoes, red potatoes, strawberries, zucchini, basil, and green beans. Carrots were thrown into this bag, and a weird zucchini/yellow squash hybrid. I picked up some peaches, because I can’t resist.

Ryan and I have been really good about eating all of our vegetables from the CSA. The green beans are the hardest to finish. We’re actually not sure what type of beans they are. How sad is that? They look like peas, but we eat them like green beans. Having a share has really challenged our culinary and gastronomic interests. 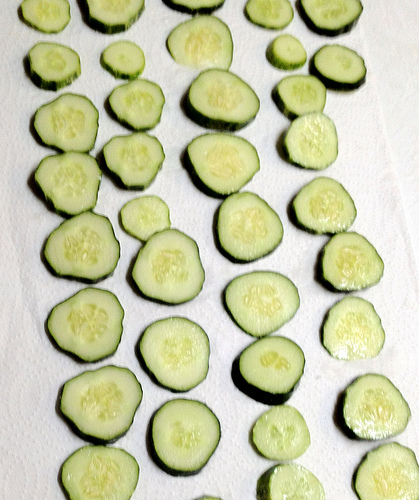 In our last CSA, we received pounds of cucumbers. I made this cucumber salad recipe with it and did not regret it. I brought it to a potluck and my friends inhaled it. I used my iPhone to take a shot of me salting the cucumbers.

Sometimes things just come together, like this perfect pairing of CSA veggies. 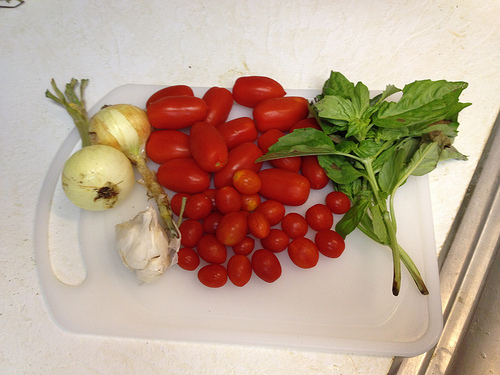 I practically threw it all in a food processor and then in a pot to make pasta sauce. 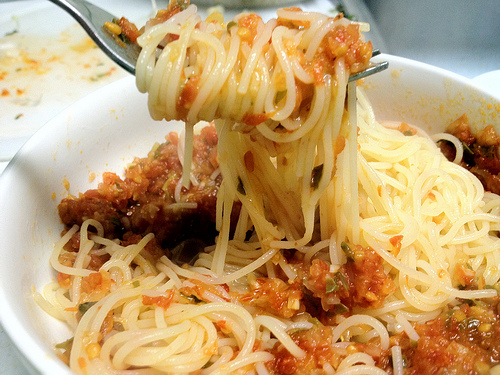 I won’t share this recipe with you, because no matter how hard I try, I can never make my homemade pasta taste as good as the jarred stuff. Do you have any thoughts on how I can improve? My friends advised me to use tomato paste.

We hit the motherload with this week’s CSA package. I always had this feeling that our previous CSA bags were a little light for the season. But this recent bag makes it clear to me that the spring and summer vegetables are on their way.  This week we are eating: spring onions, three heads of lettuce, a ton of green beans, squash, and cucumbers, strawberries and potatoes. Additionally I bought a head of broccoli for $1, cherry tomatoes for $2.50, and a bunch of kale for $1. I almost feel guilty after leaving because it’s so cheap. How are these farmers making a profit? I’d pay more, don’t they know?

Ryan and I were asked to renew our CSA share, which has sparked some discussion. A while ago, we let some of our produce go bad. Lots of it. Sometimes nothing feels worse than throwing away food. It’s hard to eat food you’re not used to eating, like chard and snap peas. We decided we couldn’t let it happen again.

We’ve been doing a lot of steaming and boiling vegetables, since it’s the fastest way to cook them. Then we eat them unseasoned, or with just a bit of salt. It’s interesting how I’ve forgotten, or perhaps never known what a plain vegetable tastes like. So much of what I eat is strongly seasoned and covered in sauce.

Our CSA included two giant bags of green beans, so we’re struggling to consume them. I boiled some and topped it with a poached egg.

This is my first attempt at a poached egg. I lost one in the process. I’ve only ever had a bite of one before and was completely grossed out. But lately, I’ve been craving egg yolks (weird, huh?) and my standard over-hard eggs are suddenly turning into gooey, runny treats.