I stopped by Publix today to pick up a birthday cake for my boss and I was appalled at the sights I saw. Really, it was cakewrecks [fantastic blog!] worthy. I would be too embarrassed to take a picture, but the selection was terrible and all of the frosting was squished on the plastic. I’m not sure how professionals let that happen. Also, the color choices were sickening.

Really this was all my fault, because I completely forgot to pick up a cake yesterday, when I would have had more time. I remembered this morning in the shower. I did happen to find a beautiful cake, but I just had to pay more than I would have liked for it.

This whole instance had me thinking about how I’d like to start decorating cakes. I bought a great kit at a garage sale for a steal of $5 a while back, and it’s just been taking up room in my kitchen. I hate having things in my house that are of no use. So I called the only place I could think of that had cake decorating classes – Michael’s. This next part was really luck, because there were classes starting today [day after payday!]. Impulse buy? Yes, but the idea has been stewing in my mind for a while. Also, classes were 50% off, so I paid $23.

Michael’s uses the Wilton Cake Decorating Course. While I would really like to apprentice with a professional baker, I guess I can’t do that until I have some basics down. It’s a lot more challenging than it looks. 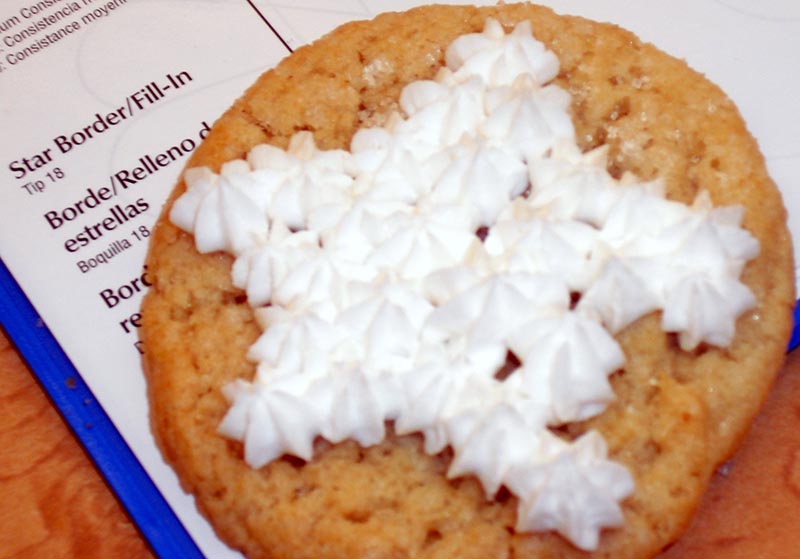 Today we did stars – both the decorating technique and the shape. I don’t know what made me think I could decorate this, because I can’t even draw a star. 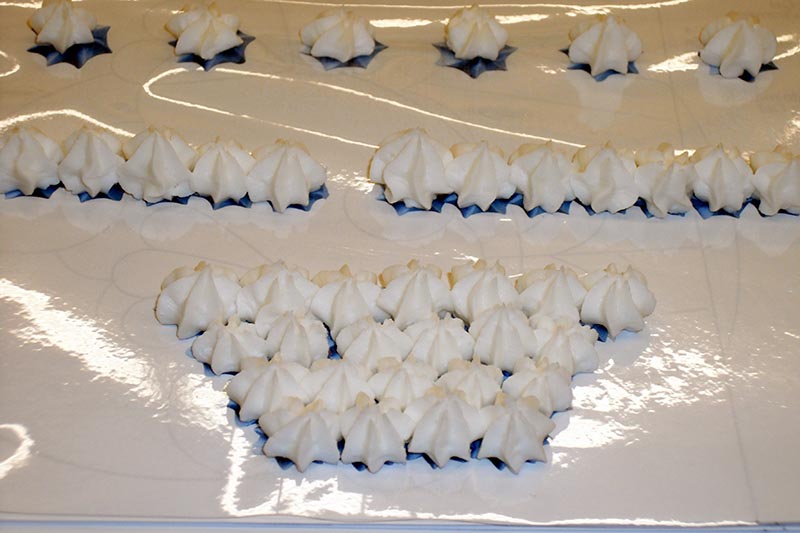 Since my camera was stolen, I took these pictures using a low-quality digital camera I borrowed from my dad this Thanksgiving. 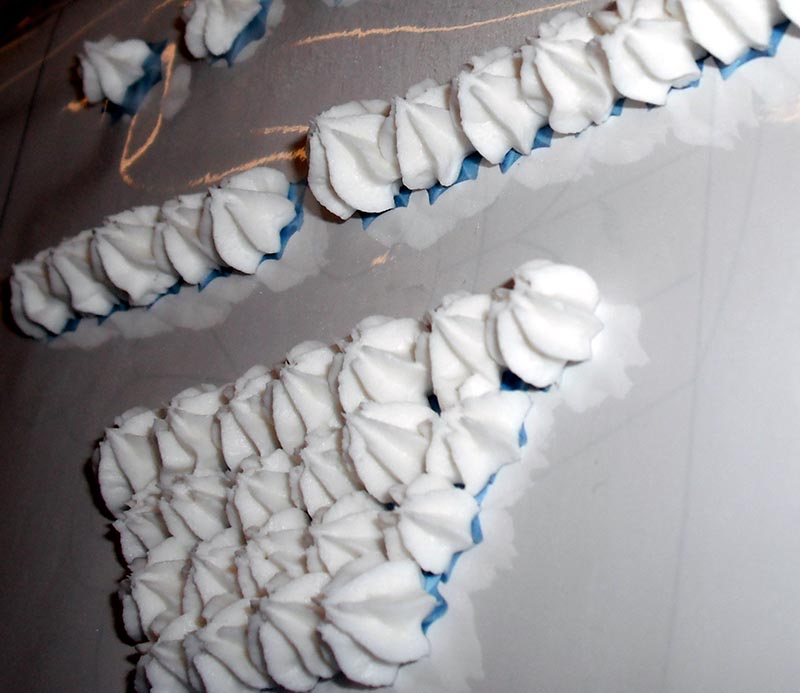 They make you practice on a laminated sheet before you move up to the cakes. Today we didn’t even get that far, it was cookies only. 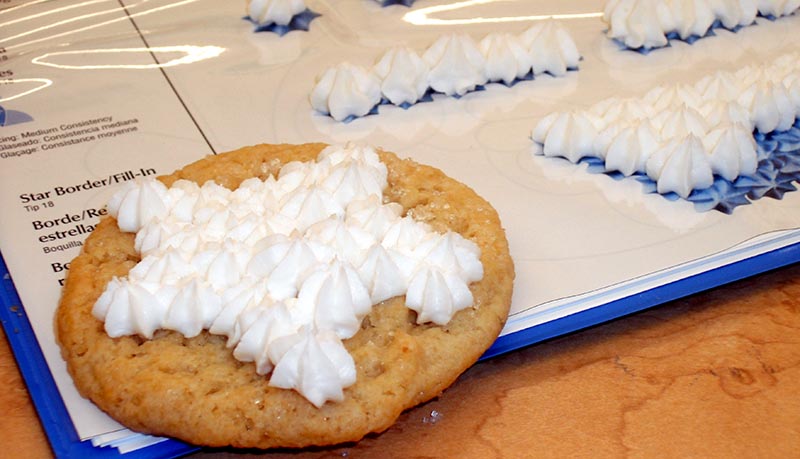 Since I was late signing up, I didn’t even get a chance to buy supplies, but a nice woman sitting next to me had an extra set [happenstance] and let me have it. 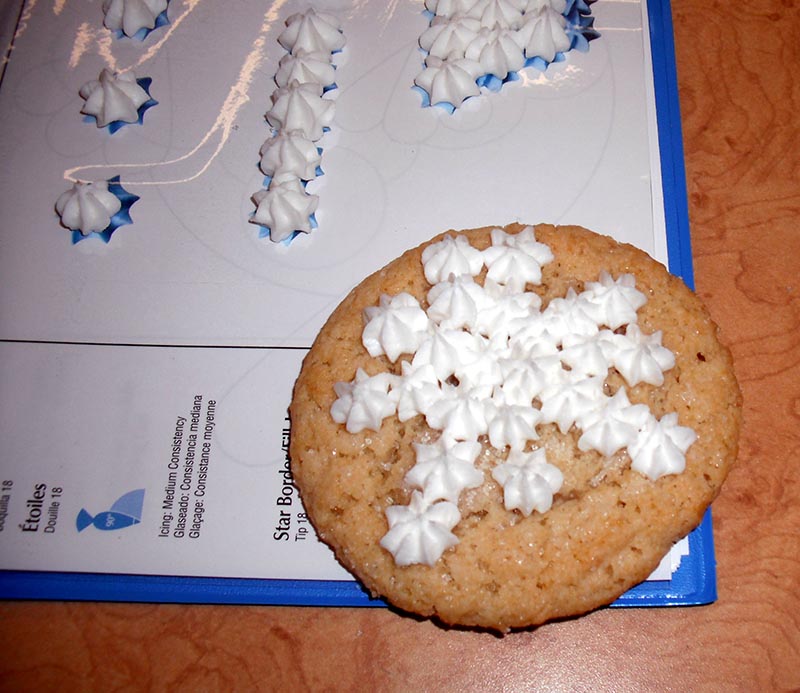 This was supposed to be a snowflake. It would have worked out, if I could have centered the frosting a little more. 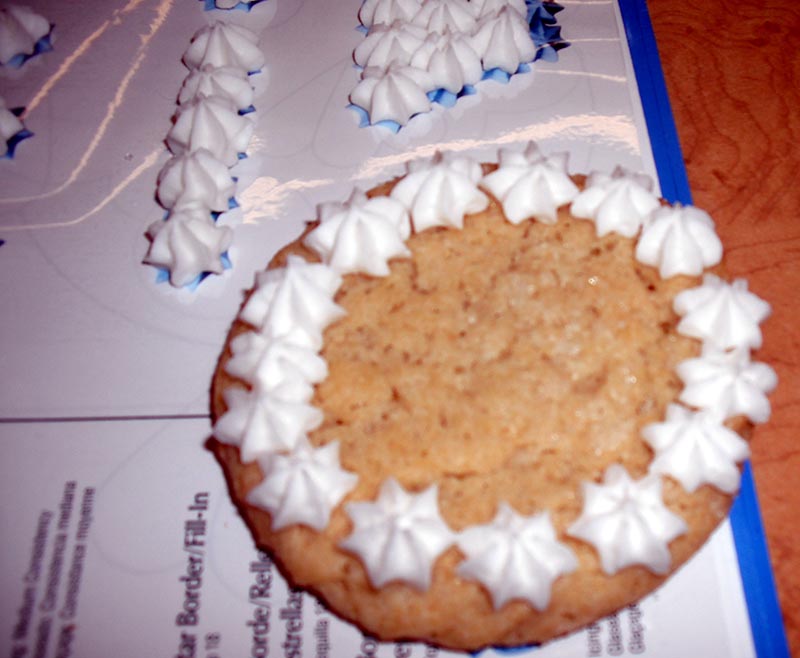 The Wilton cake decorating course is very structured, which means there isn’t much room for experimentation, which I think is always worthwhile. Also, in the decorating book, it shows the type of cakes we’ll be able to make, some of them are pretty ugly, but some aren’t that bad. The course only uses one type of frosting and it’s not spectacular. It’s one of those lard and powdered sugar frostings, which works well with decoration, but isn’t strong on the taste side. It also uses artificial butter flavor for the buttercream, not real butter (this should be appalling for any baker). I’m not so concerned about the frosting choice, but I’d like to learn how to decorate with other types. I’m optimistic the skills can transfer from one frosting to another. I hope I’m not wrong.  One final note, we don’t really learn how to bake a decent cake, which I thought would go without saying. Our instructor suggested box mixes, which are great, if we don’t plan on eating them.

I don’t mean to sound so critical of the course. I’m really excited to give this a go. If I am any good, I’ll eventually be able to work with fondant and make all sorts of fun shapes.