One of the glorious aspects of moving to Brooklyn has been the never-ending section of places to eat. How will I ever get to them all? But, I do have a gripe about my neighborhood’s lack of decent breakfast places. Aside from the French Bakery downstairs (ok, so I guess it’s not that bad), it’s hard to find sweet breakfast foods, except for the Dunkin’ Donuts down the street.

I don’t think I’ve ever had Dunkin’ Donuts before I moved to NY. There was a surprising lack of them  in Tallahassee, and I see why. They are the worst. Like, they sort of ruined my Sunday morning, their donuts are that bad.

Seeing this as a challenge, I bought this donut pan (it’s on sale!). Now, I’ve spent the past two Sundays making donuts. Unfortunately, the first round was a little disastrous but these were much improved. Prep time
15 mins
Cook time
12 mins
Total time
27 mins
Author: heidi
Recipe type: Breakfast,
Yields: 16
Ingredients
Donuts
Orange Glaze
Instructions
Prep
Combining the Ingredients
Preparing the Glaze
Assembly
3.1.08
I adapted the recipe from here. I didn’t have any milk, so I used half and half. I also used dried cranberries, but her recipe calls for fresh. 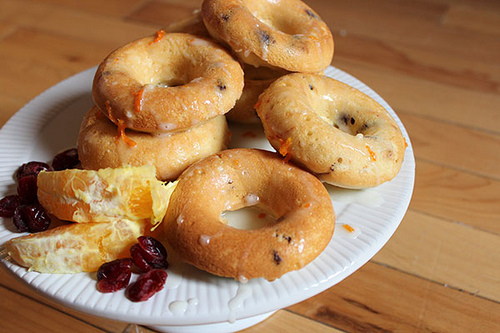 My roommates were apprehensive about the flavor combination, but it’s pretty incredible. There aren’t any donuts left.