I’ve seen a few recipes floating around the web for egg salads that use greek yogurt and avocado instead of mayonnaise. In fact, I could have sworn I save a few, or at least pinned one or two of them. But when I went to search my computer for a recipe, they were nowhere to be found.

So instead of googling one, I just winged it. So here you go. An on-the-fly, I still don’t have basic kitchen staples, let’s hope this tastes good recipe.

And it does. It could quite possibly be the best out there.

I’ll have to admit I was skeptical about giving up mayonnaise. I was raised in the south, after all. And since hearty vegetarian sandwiches are hard to find down there, egg salad sandwiches became my go-to. And (my secret confession) I don’t like Greek yogurt, so I was reluctant to try this at all. 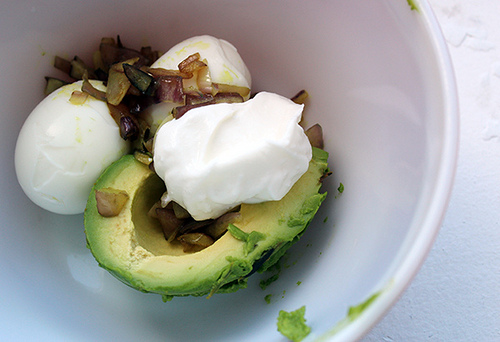 This is one of those recipes that I thought would be the sum of its parts. One that would fail to deliver something better. But I was really impressed. You don’t miss the mayonnaise. I added some sauteed red onions for crunch and flavor.  And if you’re an avocado fan, well, you’ll regret not trying this sooner.

My favorite part of making egg salad is the memories. The smashing of hard boiled eggs with a fork recalls vivid parts of my past. My mother didn’t teach me a lot of cooking growing up. But I remember the way it felt making egg salads with her. Back then it was only eggs, paprika, and mayonnaise. Last summer it was pickles, grainy mustard, and crusty bread with Ryan before we set out on a hike or a trip to the beach. Today, in a big city it is Greek yogurt and avocado. I guess everything evolves. 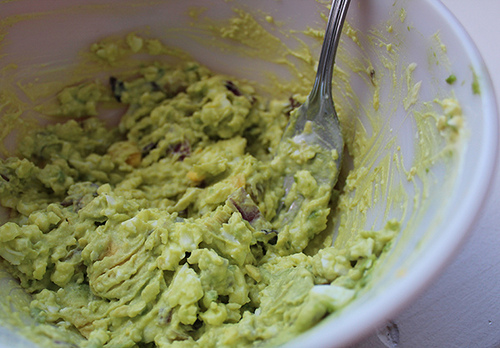