This is just a quick update.

I finished my January book. I plan to read a book a month. It was Jonathan Franzen’s Freedom. 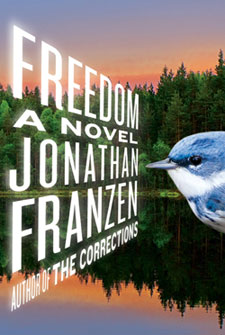 I wanted to get this book after I heard the author on NPR. It’s a pretty classic style novel about an upper-middle class family’s problems. It’s filled with touching character development that leaves you loving and hating each character. I can’t really pretend to be a great critic on books, but Oprah and the President liked it. I would recommend this novel to someone looking for a good story, but nothing cerebral or challenging.

I’m already 100 pages into my February book. Is that cheating? But it’s so good. I can’t wait to tell you all about it. If you’d like to read along, it’s David Grann’s The Lost City of Z: A Tale of Deadly Obsession in the Amazon. This is: 1. Nonfiction; 2. Written by a journalist; 3. An exotic story of treasure hunts and dangerous adventures. I can’t put it down.

I’ve officially been off of sugar for 3 days now. This weekend was terrible. I pretty much had a nonstop headache, and I can only attribute it to sugar withdraw. I felt really nauseous on Sunday, but I think that might have been a result of a 48 hour headache. I also slept most of Saturday, but was pretty active on Sunday. In order to curb any cravings, I munched on a 1 lb. bag of cherries. It’s possible to consume a pound of cherries in a weekend. I also noticed I lost some weight, without really trying. I promised myself during the hardest parts of withdraw I could eat whatever I wanted as long as it didn’t have sugar.

Then I woke up this morning and I feel kind of great. I think the worst withdraw symptoms might be over. But it might just be this 24 oz. black coffee I’m drinking. I think it’s time to employ the teeth whitening strips.

One thought on “January Book and Sugar Withdraw”