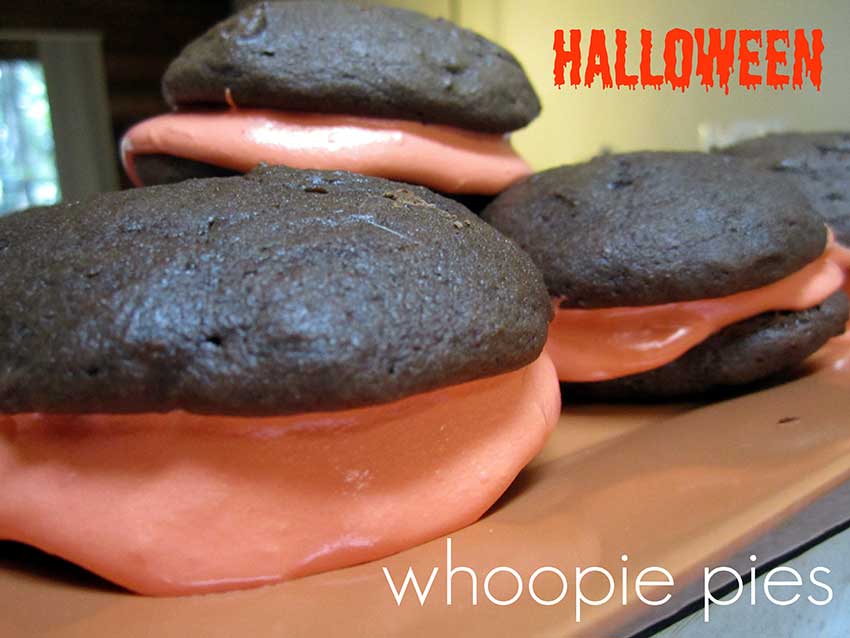 You know I couldn’t make these without  saying, “I made whoopie…pies.” I have a lot to say about my experience making whoopie pies.  Yes, they’re fun to say and pretty easy to make, but I’m not crazy about the taste and, of course, the sugar factor. That oozing cream filling that you see up there, well that’s two cups of marshmallow fluff mixed with another two cups of confectioners sugar and a cup of butter. Just looking at these things are sinful. And the mallow filling is far too sweet. I just assumed that whoopie pies were made with buttercream frosting, but that’s not the case. The authentic Amish whoopie pie is made with marshmallow. Next time, if there is one, I’d much prefer to stuff them with buttercream. The only saving grace was the buttermilk I placed in the cake. It left room for extreme sugar.

Recipie: Chocolate Whoopie Pie
I followed a variation of this epicurious recipe.

For cake:
Preheat oven to 350 degrees.

Whisk together flour, cocoa, baking soda, and salt in a bowl until combined. Stir together buttermilk and vanilla in a small bowl. Beat the butter and brown sugar until you get a fluffy mixture. Don’t wimp out, it takes time to do this. Once it’s fluffy enough, you can place the egg in. Slowly put in the flour mixture and buttermilk mixture, alternating between the two. This also took a lot of time and beating, but it’s worth it because it makes them fluffy.

Drop the batter on a baking sheet lined with parchment paper. The Epicurious recipe called for 1/4 scoops, but I did a 2 tablespoon scoop and placed them about two inches apart. Be sure to round out the drops of batter, so they’ll rise in a nice shape. Bake for 11 to 13 minutes. Pull parchment paper and cookies off of the baking sheet and transfer to cooling rack until finished. I only had one baking sheet, and it only fit 8 cookies, so I had to do this a second time. 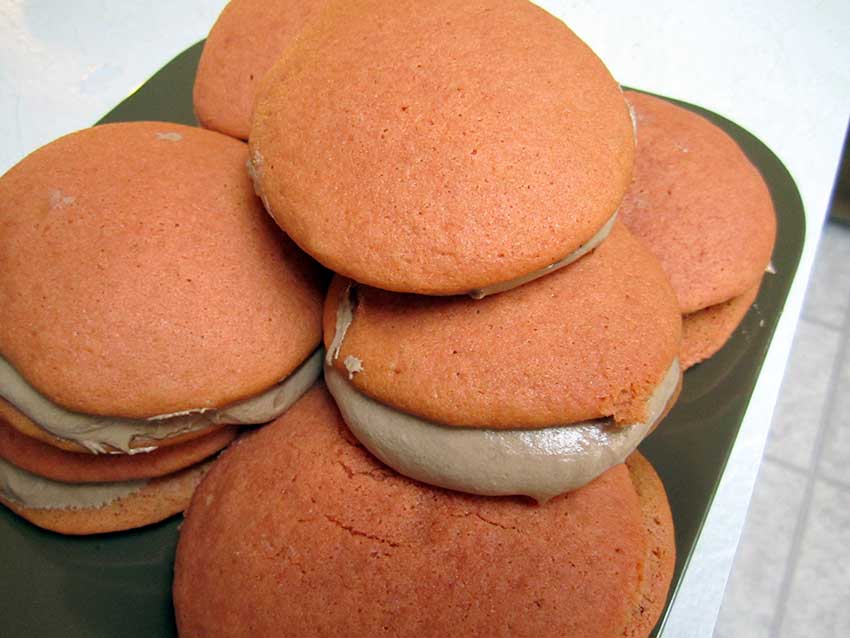 Well, I dyed them orange, that’s why they’re not blonde. They’re also filled with chocolate! It was remarkably difficult to find a recipe for blondie whoopie pies on the internet. My instinct told me to just find a cake recipe, but I didn’t want this to be a disaster. In fact, the only place I could find one was from Redbook. Yes, the magazine. I should have known. What do they know about baking? (They’re the ones I got the filling recipe from.)

But they didn’t turn out all bad. I switched this recipe a little. Instead of adding milk, like the recipe called for, I substituted buttermilk. After all, I had an entire quart of it, and I didn’t plan on using it. Here’s a caveat with this recipe, these suckers spread out and make huge saucer patties. They’re twice the size of the chocolate whoopie pies.

While the cookies cooled, I worked on the frosting. Take a look at how pretty they looked on cooling sheets. I love Halloween colors. 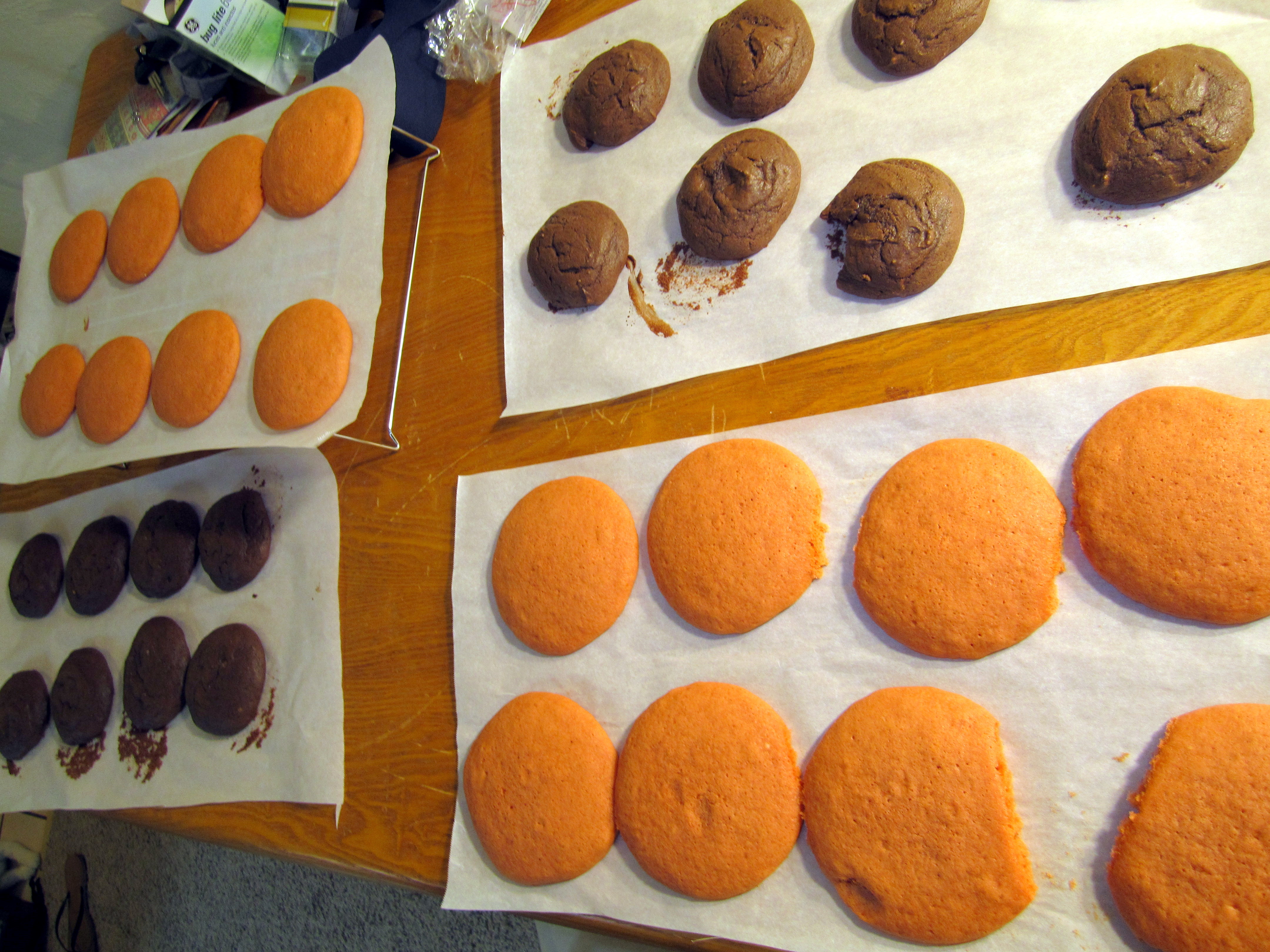 The Epicurious filling recipe had awful reviews, and I was scared away from trying it. So instead I went with the Redbook filling recipe. I followed the instructions and split the filling into two parts, so I could make one chocolate and one orange. By the way, orange has got to be the hardest color to make out of food dye. I mean, I used an entire bottle of both red and yellow for the cookies and the filling.

This filling was pretty disastrous. It just started running everywhere. The cookies were completely cooled off. It’s not a pretty sight. 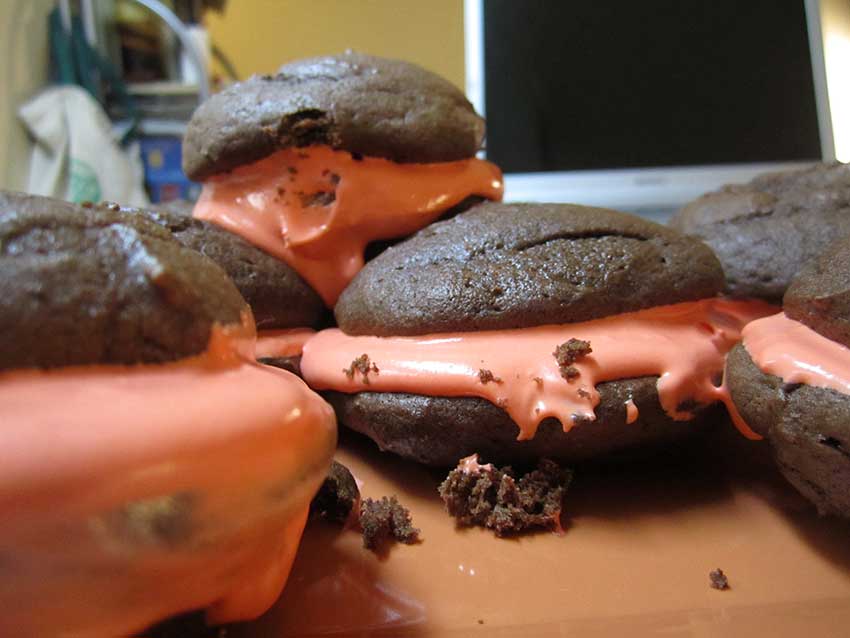 It’s like all of the whoopie pies decided to burp at once.

Regardless, it was quite a delicious dessert. I also didn’t have too much of a problem with the frosting spreading on the blondies. I attribute this to two reasons: 1. They were huge and could take excess movement, 2. The chocolate I added worked as a stabilizing agent.

I made them for a much in-demand game night that my boyfriend and I usually host. What’s more fun than good old fashion aggression and board games? I hope my guests enjoy these. I couldn’t imagine them even finishing one of them though. They’re huge and very sweet.  The end result: 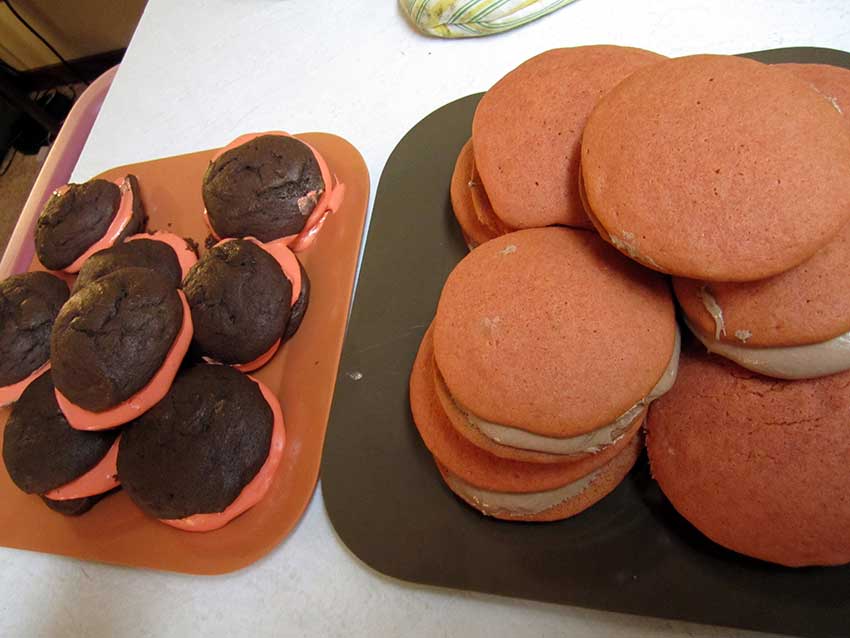 One thought on “halloween whoopie pies”